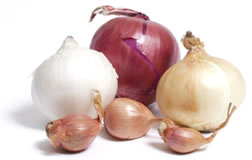 The onion is believed to have originated in Asia, though it is likely that onions may have been growing wild on every continent. Dating back to 3500 BC, onions were one of the few foods that did not spoil during the winter months. Our ancestors must have recognized the vegetable's durability and began growing onions for food.

The onion became more than just food after arriving in Egypt. The ancient Egyptians worshipped the onion, believing that its spherical shape and concentric rings symbolized eternity. Of all the vegetables that had their images created from precious metals by Egyptian artists, only the onion was made out of gold.

Today, onions are used in a variety of dishes and rank sixth among the world's leading vegetable crops. Onions not only provide flavor; they also provide health-promoting phytochemicals as well as nutrients.

Onions can be classified as either sweet or storage onions and are most often sold as a red, yellow or white onion. Sweet onions, which contain a higher water content but a lower sulfur content, spoil quickly and are less pungent than other varieties. They are most often eaten raw or only lightly cooked. One common variety of sweet onion is Vidalia onions.

Unlike onions where each plant normally forms a single bulb, shallots form clusters of offsets, rather in the manner of garlic.

Shallots are extensively cultivated and much used in cookery, in addition to being excellent when pickled. Their flavor is perhaps more delicate than that of onions, perhaps more intense. Certainly it is distinctive. Finely sliced deep-fried shallots are used as a condiment in Asian cuisine. Shallots tend to be considerably more expensive than onions, especially in the United States where they are almost exclusively imported from France. 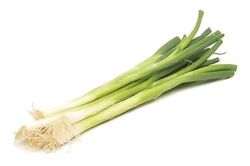 Green onions, or scallions, or spring onions are edible plants of the genus Allium. The upper green portion is hollow. They lack a fully developed root bulb. Harvested for their taste, they are milder than most onions. They may be cooked or used raw as a part of salads or Asian recipes. Diced green onions are used in soup, noodle and seafood dishes. To make many Eastern sauces, the bottom quarter-inch of green onions are commonly removed before use.

Retrieved from "https://romanianrecipes.fandom.com/wiki/Onion?oldid=15004"
Community content is available under CC-BY-SA unless otherwise noted.