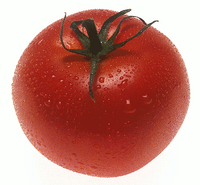 The tomato (Lycopersicon esculentum) is a plant belonging to the family Solanaceae (nightshade family). It is related to the potato and the eggplant. While technically a fruit, the tomato is commonly considered a vegetable because of its uses.

Although the tomato was cultivated in Mexico and Peru for centuries before the European conquest, it is one of the newest plants to be used on a large scale for human food. The name of the tomato comes from the Nahuatl language which was spoken by the Aztecs and other groups in Central America. The Spanish explorers brought back the tomato seed from South America to use it purely for ornamentation puroposes, referring to the tomato as the "love apple." This is probably because of the fact that the tomato was commonly viewed as poisonous. This view has some basis in reality as the fruit of the tomato is the only part of the plant that isn't toxic. It is only in the past century that the tomato has become recognized as a valuable food.

Tomatoes have been used in salads as early as the 1600s. In the 1800s, the tomato was reintroduced as a food plant and now ranks third amongst US vegetable crops. While the tomato is still used as a salad vegetable, three quarters of tomatoes are processed into juice, canned tomato products, soups, catsup and tomato pastes. In Italy, tomato seed oil is extracted from the seeds left over from the canning process. The tomato is also used to create the anti-biotic tomatine. Currently, tomatoes are one of the most popular vegetables eaten by Americans.

There are numerous varieties of tomato, ranging from the large beefsteak tomato to the very small cherry tomato. The most widely available varieties are classified in three groups: cherry, plum, and slicing tomatoes. Tomato shapes vary from spherical to elongate; sizes range from 0.6 inches across to more than 3 inches across. In recent years, heirloom tomatoes have become trendy in cooking and gardening. A new sweet variety like the cherry tomato is the grape tomato, which is really wonderful to eat alone or in a salad.

Tomato varieties are roughly divided into several categories, based mostly on shape and size. "Slicing" or "globe" tomatoes are the usual tomatoes of commerce; beefsteak are large tomatoes often used for sandwiches and similar applications - their kidney-bean shape makes commercial use impractical, along with a thinner skin and shorter shelf life; globe tomatoes are of the category of canners used for a wide variety of processing and fresh eating; oxheart tomatoes can range in size up to beefsteaks, and are shaped like large strawberries; plum tomatoes, or paste tomatoes (including pear tomatoes), are bred with a higher solid content for use in tomato sauce and paste and are usually oblong; pear tomatoes are obviously pear shaped and based upon the San Marzano types for a richer gourmet paste; cherry tomatoes are small and round, often sweet tomatoes generally eaten whole in salads; and grape tomatoes which are a more recent introduction are smaller and oblong used in salads; campari tomatoes are also sweet and noted for their juiciness, low acidity, and lack of mealiness; they are bigger than cherry tomatoes, but are smaller than plum tomato.

Tomatoes are also available in a variety of different formats. They can be bought whole in cans, diced or ground. They are also available as sauce, purée and paste. The only difference between these three distinctions is the amount of water still left in the tomatoes. Sauce is the most liquid form, then purée, and finally paste would be the driest.

The juice of the tomato can also be extracted and is often also used in cooking as well as for drinks.

Tomatoes are also available in dried form. Typically these are called sun-dried regardless of the method used to actually dry them. Sun-dried tomatoes can be purchased either packed in oil or not. Those not packed in oil require re-hydration before use.

Cold temperatures damage tomatoes, so never buy tomatoes that are stored in a cold area. Choose plump tomatoes with smooth skins that are free from bruises, cracks, or blemishes. Depending on the variety, ripe tomatoes should be completely red or reddish-orange.

Store tomatoes at room temperature (above 55 degrees) until they have fully ripened. This will allow them to ripen properly and develop good flavor and aroma. Try to store tomatoes out of direct sunlight, because sunlight will cause them to ripen unevenly. If you must store them for a longer period of time, place them in the refrigerator. Serve them at room temperature. Chopped tomatoes can be frozen for use in sauces or other cooked dishes.

Retrieved from "https://romanianrecipes.fandom.com/wiki/Tomato?oldid=15012"
Community content is available under CC-BY-SA unless otherwise noted.